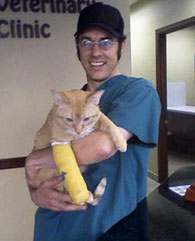 Perry has been the Hospital Manager for the past 17 years. He recently moved from the Milwaukee East Side area to the North Shore area. Since he had been living close to UWM for so long, the move to Fox Point is something to get adjusted to. Here he is pictured with one of his nephews, ‘Elway’. Elway decided he needed to taste a loaf of bread on top of the fridge one day, and somehow on his way down, this kitty injured his leg. Elway’s mom was very worried that her cat had a broken leg, but it turned out this cat needed a cast to treat a soft tissue injury. Perry has a naughty little cat named ‘Hal’, named after Halloween, the day he was abandoned at our clinic. Hal comes to work with Perry to see his aunties, and to see Dr. Singh, who went from saving the kitten’s life to administering cat vaccines at his first annual appointment. 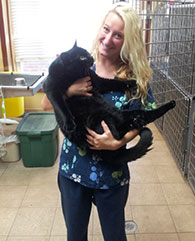 If you ask Liz why she enjoys working here, she says “Animal Health Rocks!” Why does it rock? Because she gets to be “an advocate for animals” by helping people help their animals. She also loves the animals and her co-workers. (Awww, thx!) However, Liz’s best bud is ‘Wiley’ whom she has had since he was rescued as a puppy from the Wisconsin Humane Society, where they did some of his puppy shots and neutered him. She also used to have a diabetic cat named ‘Toby’, a cat who began drinking a lot of water, and using the litter box a lot. Both are common signs of diabetes. Liz is currently enrolled at Bryant and Stratton College to become a nurse. 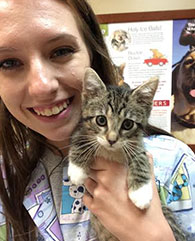 Abbie is a Rockford, Illinois native who came to Milwaukee to attend UWM. She is pursuing a bachelors degree in biology as well as a minor in chemistry, and hopes to move on to vet school after graduating. Abbie has been working as a vet assistant since 2013 at home in Rockford. When she’s not busy with work or school, Abbie enjoys spending time with her friends and cheering on her favorite sports teams, including the Chicago Blackhawks and the Iowa Hawkeyes. 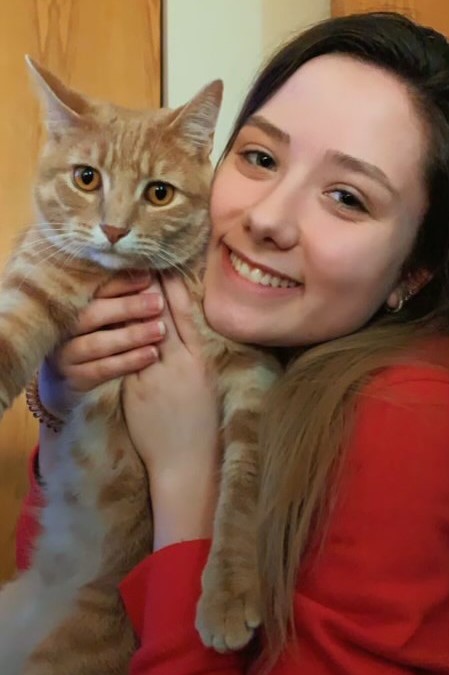 From a young age Crystal knew helping animals would be her passion. She’s had many pets from dogs to cats to hamsters and rabbits. After she started here in May of 2020 as an extern she graduated from Milwaukee Career College with a diploma in Veterinary Assisting. She hopes to soon become a certified technician as she gains more experience in the field. When she’s not at work she enjoys baking, spending time with her family, and catching up on the latest tv shows. 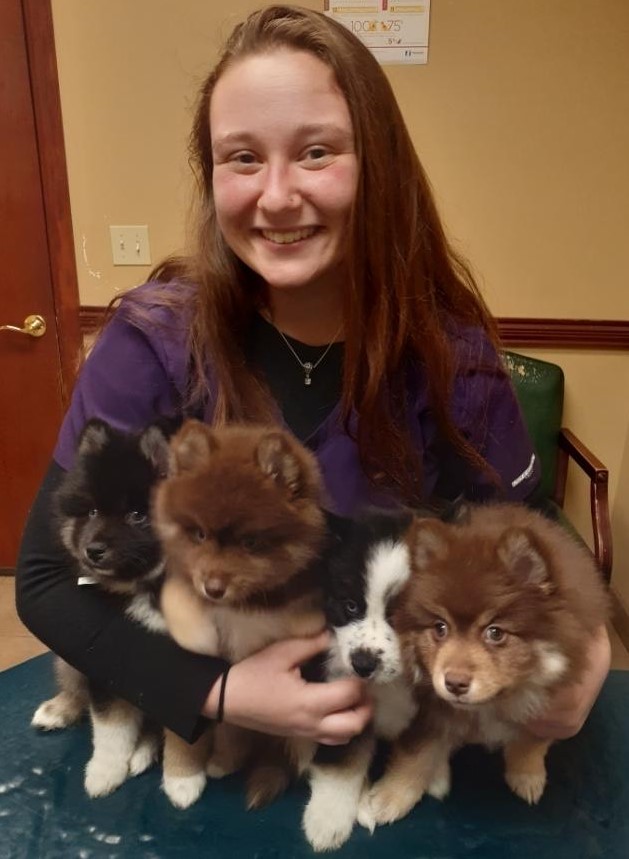 Sam grew up loving her two cats, her dog, and many fish. Originally from Illinois, she is currently studying at UW-Milwaukee. While she’s not going to school in the veterinary field, she hopes that she can incorporate animals into her future profession of high school Social Work to help students. While she’s not working or in school, she loves watching movies, visiting family and friends, and painting. Sam hopes to adopt a few dogs of her own when she is able to. 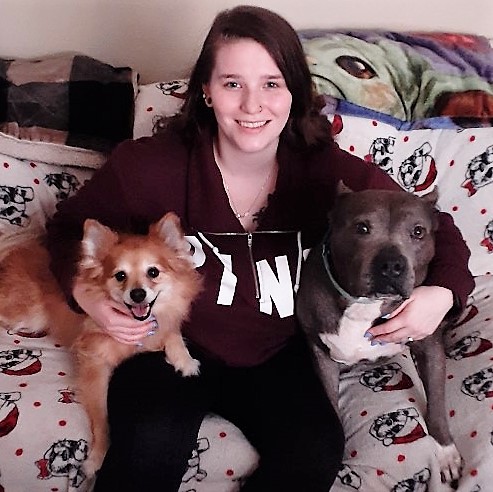 Rachel has only had jobs in pet care. Starting in a pet boarding facility, later a couple of doggy daycares, and finally the Bayshore Vet Clinic. She has always had a passion for four-legged friends. Rachel enjoys meeting all the patients and helping them receive the care they need. Rachel and her fiance, Caleb have 3 pets at home. First is Rusty, the 9-year-old Pomeranian mix, she has had since he was a puppy. Also Oreo, a 10-year-old domestic shorthair she rescued over 6 years ago. Last but not least is Tara the 7-year-old pitbull mix Rachel and Caleb rescued together, almost 4 years ago. In Rachel’s free time she likes to spend time cuddling up with one or more of them for a movie.