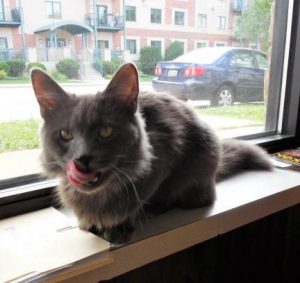 Our spunky clinic kitten Starr has made his return! Starr has spent the last 2 months living with Perry and his cat Hal. Since Starr is still a young cat, he has a lot of energy and wants to do nothing but play all the time. After chewing threw some IV lines and damaging some of our surgery equipment, we decided Starr needed somewhere to hangout for a while to adjust and grow up.

During his two month long sleepover at Perry’s, Starr learned a lot of things. He learned his name, not to jump onto kitchen counters (which will hopefully translate into our treatment room counters), and how to play nicely with other pets (thanks, Hal!). Stop in and meet Starr if you haven’t already, and see how much he’s grown!